You may recognise Hannah Jackson as Recruit 25 from the Channel 4 reality TV show ‘SAS: Who Dares Wins’, where she recently starred as one of the first women to be put through the gruelling selection process. However, Hannah has been making a name for herself as a rural ambassador and in the farming world, Hannah is better known as The Red Shepherdess.

Hannah’s story is even more remarkable as she didn’t set foot on a farm until she was 20, growing up in a small semi-detached house in Bebington on the Wirral. After graduating with a BSc in animal behaviour, Hannah went to Canada to research whales, however, it was only after a visit to the Lake District and watching a lamb being born, that Hannah realised what she really wanted to do.  Having established her reputation as a skilled shepherdess, a big part of Hannah’s work, from January to May, is working as a lambing contractor.

After just three years of shepherding her Practical Guide to Lambing received enthusiastic reviews and in 2017, she was appointed as a National Sheep Association ‘Next Generation’ ambassador, inspiring young people who want to get into agriculture. As if that isn’t enough, this remarkable young woman manages to find the time to visit schools around the Lake District and back home on the Wirral, were she aims to educate and connect school children with where their food comes from. 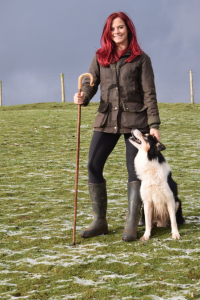 Joyce is a third-generation sheep farmer and farms 5500 acres on her farm Armadale, on the North coast of Scotland near Sutherland, in partnership with her husband Ian.  Joyce’s farm is home to approximately 830 pure-bred North Country Cheviot Hill ewes in addition to approximately 50 rams, 255 ewe hogg replacements, 25 suckler cows and some free-range outdoor hens whose eggs she sells locally.

Joyce has strong views that at both a farm level and as an industry, farmers need to get better at re-connecting with their communities and the general public to help them appreciate the high-quality lamb and beef that is produced in Scotland.

In 2015, Joyce’s farm Armadale was awarded Agriscot Scottish Sheep Farm of the Year by Thornton’s Law. Joyce is an advocate of equality, diversity and protecting rural communities, and would encourage everyone to buy local.  At present Joyce is the co-chairperson of the Scottish government’s Women In Agriculture Taskforce and is committed to ensuring that women have the skills and confidence they require to take up leadership roles in the agri-food industry, which in turn will allow them to play a part in leading agricultural innovation to enhance British farming. 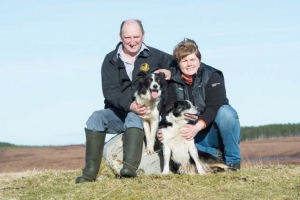 Pictured: Joyce with her husband Ian and dogs Meg and Sky.

Paula McIntyre, originally from Aghadowey in County Antrim, is one of Northern Ireland’s most popular broadcasters and chefs.  Paula has worked in top London restaurants including Michael Caine’s Langan’s brasserie and L’Escargot, before taking up a Scholarship to Johnson and Wales University in America and graduating with a Bachelor of Science in Culinary Arts.  Paula later opened her own restaurant in Manchester and won several top awards. However, Paula’s heart belonged in Northern Ireland and after returning home Paula later held the role of head chef at Castle Leslie in County Monaghan, before holding roles in Fontana in Holywood and Ghan House cookery school and restaurant in Carlingford. This was before she turned her hand to lecturing at the Portrush Catering College and more recently, the Northern Regional College in Ballymoney.

Even though Paula has appeared on national television programmes such as Ready Steady Cook and has also written and published a book, she is probably best known and most at home on BBC Radio Ulster alongside John Toal on the Saturday Magazine Show.

Paula is a massive supporter of local food producers and is continually encouraging her audiences and listeners alike to buy local.  With Northern Ireland food products such as butter, bread, meats and ciders constantly winning awards and in huge demand from top restaurants and supermarkets in England, Paula believes that buying local will help to protect and sustain Northern Ireland’s Agri-Food Industry. 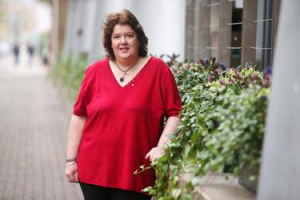