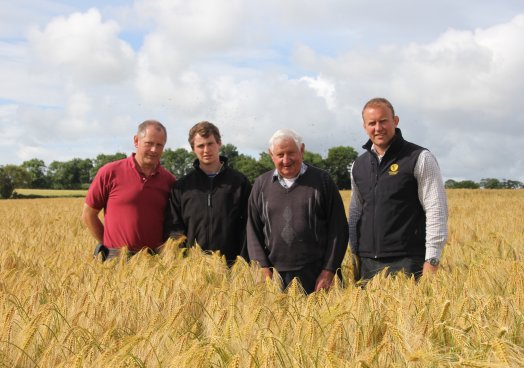 The Ulster Farmers’ Union, along with Winter Barley competition sponsors Bayer Crop Science and Joseph Morton Ltd, is pleased to announce that James McClelland of the UFU NW Derry Group has been awarded first place in the 2014 UFU Winter Barley Cereal Competition.

A very close second place was awarded to John & David Matthews of the UFU Ards Group, and coming in a respectable third place was Harold & Darren Reid of the South Tyrone Group.

The 2014 judges for this year were Lisa Black from AFBI, James Byrne from Bayer Crop Science and David Shilliday from Joseph Morton Ltd.

On behalf of the judges David Shilliday from Joseph Morton Ltd said; “We would like to congratulate all those who made it to the final on the high quality of the crops produced this year.  The standard was exceptional this year and all the crops were a credit to the growers involved, especially the winning fields, which combined excellent weed and disease control with overall prime nutrition and crop consistency leading to high yield potential.  The management of the crops this season has been remarkably successful and it was a difficult task identifying and separating the winning fields.”

UFU deputy president Ivor Ferguson said; “I would like to extend my congratulations to all finalists and especially to James McClelland on winning.  The UFU Cereals Competition recognises the talent of cereal growers in Northern Ireland and there is still time for cereal growers to enter the Oats, Winter Wheat, and Spring Barley cereal competition categories for the cereal competition.  If you wish to enter please contact your group manager for details of your local group competition deadline.”

The awards for the Winter Barley, Oats, Winter Wheat and Spring Barley cereal competition categories will be officially presented at the 2014 Seeds and Cereals Presentation lunch planned for later this year.