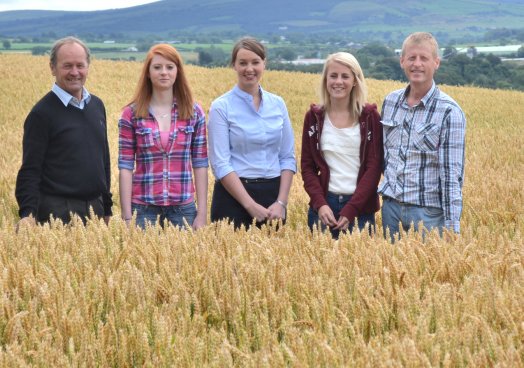 Speaking on behalf of the competition judges, Howard Murray of Joseph Morton Ltd said; “The quality of the entries from farmers across Northern Ireland was high and all entries were a credit to the growers involved. Growers have managed their crops well in what has been a difficult season and yield potential looked good.  We would like to congratulate not just the winners, but all those who entered; the high quality of crops highlighted the management skill necessary to reach this level of competition.”

Runner-up in the Winter Wheat competition was David Magill from Newtonards, Co Down a member of the Ards Group; and Robert Montgomery, a member of the North Antrim Group, was placed third.

UFU President Harry Sinclair added; “Once again our cereal growers have excelled despite a difficult season.  The standard of Winter Wheat crops grown across Northern Ireland, and in particular the top entries to our competition, is a testament to the expertise we have in our arable industry.  We have short listed crops from as far apart as North West Derry and the Ards Peninsula which is very encouraging.  I particularly want to thank Joseph Morton and Bayer Crop Science who continue to enthusiastically support and promote our cereal competitions, the competition judges, our Group Managers who co-ordinate the local competitions, and the many UFU members who entered this year’s Winter Wheat competition.”

The awards for the Winter Barley, Oats, Winter Wheat and Spring Barely cereal competition categories will be officially presented at the 2013 UFU Cereal Competition Lunch hosted by the sponsors later this year.