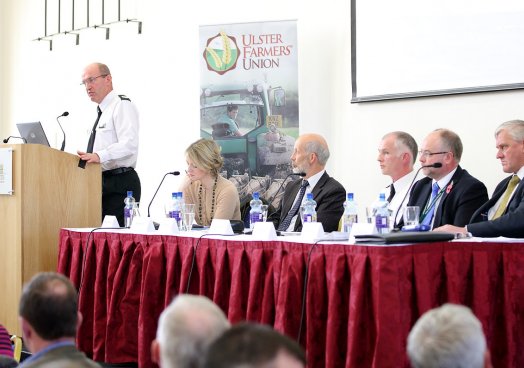 The issue of rural crime remains top of the agenda for the UFU’s Legislation Policy Committee who believes there are several priority areas that could significantly reduce the number of incidents;

Recently, representatives of the committee met with Inspector Keith Jemison of F District. In response to the level of livestock theft in the area, F District has implemented several initiatives that are successfully reducing the level of agricultural crime in the area. Intelligence was effectively utilised via an interagency and cross-border approach.

F District continues to nurture a growing and increasingly trusting relationship with the agricultural community, through its effective Farm Watch scheme which offers farmers help and advice on farm security. This trust is also strengthened by the decision to redistribute PNSI officers to guarantee three neighbourhood officers per ‘patch’. These officers gain valuable local knowledge and are encouraged to make themselves known to local residents, promoting confidence within rural communities.

Keith explained that whilst the PSNI in F District have strived to improve their engagement with the rural and farming community, they  feel that there is always room for improvement and as such are keen to learn how they could to do things better. An exchange of information between the police and the rural community is vital in reducing crime and improving confidence in policing.

The UFU believe this is an excellent example of the effective use of existing resources to tackle issues head-on and would commend Keith and F District for their creative and proactive approach.

There are other good examples in Northern Ireland but it is vital that all policing districts learn from good practice and implement similar initiatives to make it as difficult as possible for criminal’s provincewide to target Farm Businesses.

The UFU recognise that as part of this collective approach farmers have a role to play by ensuring property is as secure as possible but we believe F District’s approach is giving the agricultural community the confidence to work in partnership to fight the problem together.