Former Upper Bann MLA and Waringstown woman, Jo-Anne Dobson, is the Northern Ireland ambassador for Kidney Care UK and a partner in her family’s Aberdeen angus beef farm.  During March 2018 Jo-Anne gave her son Mark, the ultimate gift when she donated a kidney to him following the failure of his previously transplanted kidney and months of dialysis.

Having been diagnosed with renal reflux at just five weeks-old, Mark has suffered from kidney problems almost all of his life and Jo-Anne is no stranger to the daily challenges an individual with reduced kidney function faces.  However, it is Jo-Anne’s determination and commitment to change organ donation laws in Northern Ireland that she is best known for, tabling a Private Members Bill in the Northern Ireland Assembly during December 2012 and later becoming chairperson of the newly created Northern Ireland Assembly All-Party Group on organ donation.

Jo-Anne continues to campaign for organ donation and ran a leg of the Belfast City Marathon in May 2018, just seven weeks post-surgery to raise vital funds to support kidney patients and their families in Northern Ireland. 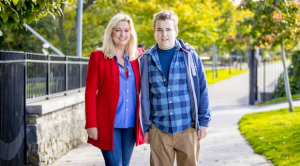 Deirdre O’Shea is currently employed as the executive director of Irish agri-educational body, Agri Aware. The charitable trust educates the public on the origins of their food and the complexity of the food supply chain through initiatives and projects such as the family farm at Dublin Zoo.

Deirdre is a huge promoter of the agri-food industry and works to continuously improve the image of our sector. As a woman in agriculture, she is delighted to see an increasing number of women entering the farming industry in recent years.

Rhonda Geary maybe better known for her role as operations manager with the Royal Ulster Agricultural Society (RUAS). Having clocked up nearly thirty years’ service with RUAS, Rhonda oversaw the delivery of Balmoral Show at its new home of Balmoral Park back in 2013.

A well-known face on the show circuit, Rhonda hopes to see Balmoral Park develop into a centre of rural excellence for Northern Ireland. During October 2018, Rhonda was the proud recipient of the “Women of Excellence in Agriculture” award at the Farming Life Awards, and was delighted that through attainment of this award her contribution and commitment to the Northern Ireland Agri-Food Industry was recognised.