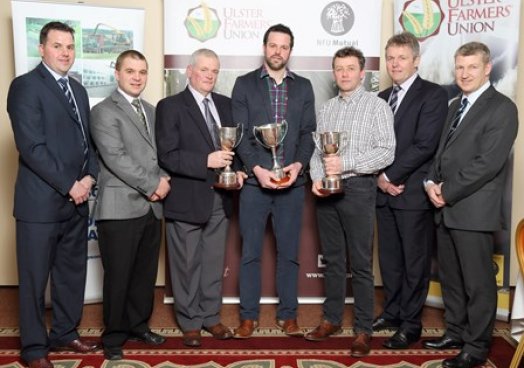 David and Steven Jackson of the North Down Group (Dairy), Alan Beattie of the North Antrim Group (Beef and Sheep) and Robin Macauley of the Mid Down Group (Alternative Forage) took top honours in the competition which saw a record number of entries from farmers in each of the UFU’s twenty-five groups.

UFU Deputy President Barclay Bell said; “The UFU’s annual silage competition has always encouraged excellence and healthy competition among producers and despite enduring very challenging silage making conditions at the beginning of 2013, the competition entries was once again of the highest standard.  Our sponsors, CAFRE, UFU Group Managers and most importantly the farmers have worked hard on ensuring we had a great competition and I would like to thank them all for the positive way in which they participated.”

Speaking on behalf of the sponsors Ecosyl Products Ltd and John Thompson & Sons Derek Nelson said; “We saw some exceptional silage despite the difficult start to the year.  Good forage is crucial for our industry and the winners can be rightly proud of their efforts.  We are delighted to be sponsoring such a progressive event.”

Competition judge Ann Brown from CAFRE stated; “The winning farmers’ focus on silage quality, effluent control and farm safety was excellent and despite the difficult start to the year, the dry summer provided the perfect opportunity for quality silage to be harvested and it was a pleasure to visit so many excellent and positive farm businesses.”