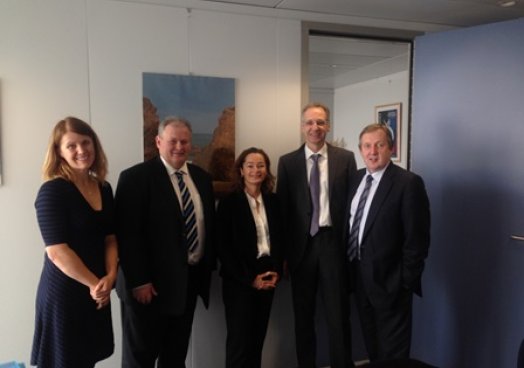 Harry Sinclair said: “Back in December 2013 DARD issued draft maps for the new ANC designation which have caused some serious concerns.  The ANC designation is a two stage process, requiring designation of land according to biophysical criteria as well as the removal of any areas which have overcome their natural constraint by investment or economic activity through what is called ‘fine tuning.’  Some time ago the UFU managed to secure the use of criteria which permitted the inclusion of our existing LFA areas and the maps are now in the process of fine tuning.  While the UFU have understood for some time that this fine tuning process would exclude virtually all of the existing Disadvantaged Area from a future ANC designation, these new draft maps have highlighted that there are a significant number of the existing Severely Disadvantaged Areas which could also be excluded and, indeed, that some presently non-LFA areas could now be included.

“When we met with the Senior EU Commission Officials in Brussels last week we highlighted our concerns with regard to the fine tuning aspect of the Regulation and were assured that there would be sufficient flexibility to adopt a method suitable for Northern Ireland.  In fact the Commission told us that Member States are free to develop their own approach to fine tuning so that the redesignation is as accurate as possible and that they intend on publishing further fine tuning guidance in March. This is very positive as it gives us the opportunity to ensure that we have a designation in place which is credible and reflects the true nature of the disadvantage on the ground.

“It is now imperative that the Minister takes the right decision on the ANC scheme so that we have time to address these redesignation issues.  As UFU we have emphasised in our response to the DARD CAP consultation that the ANC scheme should remain in Pillar Two of the CAP going forward, which under the EU rules would give us more time to work on getting the maps right, as the new designation does not have to come into force until 2018. Furthermore, by keeping the ANC scheme in Pillar Two it would also provide for a period of transitional support for any existing LFA areas which would be excluded from a revised designated area.”

It is the Union’s understanding that DARD is still seeking guidance on fine tuning and that the maps issued in December 2013 are in no way final. In the meantime the UFU will continue to work with the Department on this issue to ensure the best possible outcome for Northern Ireland.