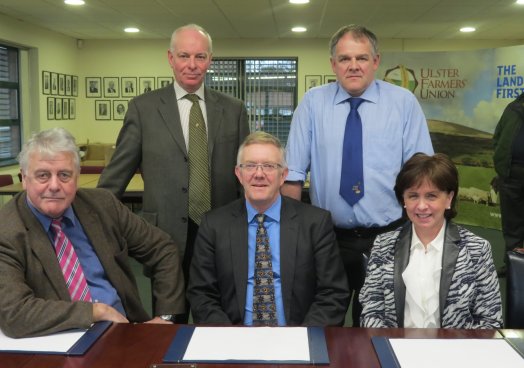 Since the CAP Reform package was agreed in Brussels nearly two years ago, the UFU has been aware that many local farmers could potentially face land availability issues as the associated CAP regulations were rolled out and has been actively working during this time to find a way to satisfactorily resolve these anticipated difficulties.

UFU Deputy President Ivor Ferguson, who led the UFU delegation that included many directly affected growers, said: “Since the EU agreement was reached in June 2013 the Union has been fully aware that the requirements around active farmer and the establishment of new entitlements were likely to have a detrimental impact on land availability for many farm businesses. Potato and vegetable growers were recognised as being particularly vulnerable as they generally require fresh ground annually and largely relied on neighbouring farmers and landowners for ‘clean’ parcels of land in order to grow their crops.

“The Union's main solution at the outset was to rebase entitlements but use an historic reference year like 2013 for the definition of an active farmer, which would have prevented the creation of artificial conditions that a future year could not. Disappointingly, despite a joint constructive initial meeting, which we and DARD had with the EU Agriculture Commissioner and his senior officials in 2013 where this issue was fully discussed, DARD subsequently ignored our advice and opted for a date in the future. As a result many genuine farmers and growers across all sectors are now facing land availability difficulties as landowners try to prove their involvement in farming activity in 2015, because of DARD’s decision, and are holding back land for themselves.

“When this opportunity was missed, we subsequently engaged with other relevant industry organisations and jointly approached DARD to ask that something be put in place that would allow potato and vegetable growers to access land from their neighbouring active farmers, while still enabling these neighbours to establish entitlements on that land. With the move to a flat rate payment many active farmers want to minimise any reduction in existing individual direct support funds and are planning to spread their entitlements over all the land available to them. This has meant that many potato and vegetable growers have struggled to secure land for 2015, as there have been neither assurances nor an ideal solution from DARD in relation to this complex issue.

“We have met with DARD on several occasions and have also raised this issue directly with the DARD Minister and at these meetings have explored many options in an attempt to find a satisfactory solution to these anticipated land availability difficulties. We have also recently met with both Margaret Ritchie MP, a member of the Environment Food and Rural Affairs Committee in Westminster, and some of our local MLAs. This most recent meeting with our MEPs was to ensure firstly that they have a firm understanding of the extent of the problem facing many potato and vegetable growers in particular and secondly to ask that they raise these genuine practical difficulties directly with the EU Commission."

Ivor concluded: "These difficulties are very real and for many potato and vegetable growers in particular are very serious. We have asked our MEPs to do all that they can to help as some of these growers are already being put out of business."