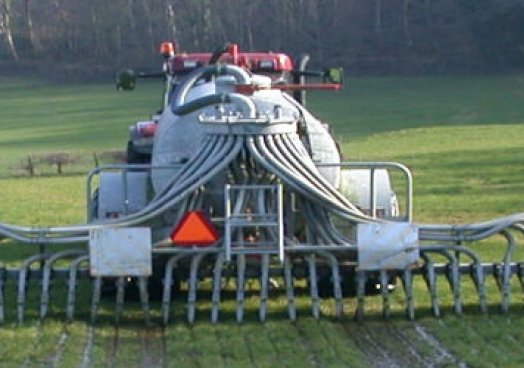 Following the agreement of Northern Ireland’s new four year Nitrates Action Programme with the EU Commission, Ulster Farmers’ Union President Ian Marshall has said that while farmers will be relieved that a number of concerning additional requirements had been removed prior to agreement, complying with the programme still remains a difficult challenge. The comments were made following DARD and DOE’s announcement that it has formally agreed the new four year Nitrates Action Programme and nitrates derogation for Northern Ireland with the EU Commission.

Ian Marshall said: “The Union’s target has been to secure a revised Action Programme which meets the objective of protecting and improving our local water quality while at the same time ensuring the practical details are workable for farmers.  This has been our message throughout the process and having seen the final details of the new Nitrates Action Programme for the period 2015 to 2018, I am pleased that for the most part common sense has prevailed and some of the more extreme initial proposals which we opposed, such as the requirement to cover new outdoor slurry stores, have been dropped.

“We are however very disappointed that farmers will be facing more paperwork and increased bureaucracy as those who export organic manures will now be required to submit associated records annually to NIEA. The Union lobbied hard to see this new requirement dropped but unfortunately, the EU Commission has made it clear that this was non-negotiable. However, there is good news in the fact that the EU Commission has decided to renew Northern Ireland’s Nitrates Directive derogation for a further four years. The derogation provides some relief for more intensively stocked farms when complying with the Nitrates Action Programme and in some circumstances it is the most cost effective way of complying for certain farms.

“I would also like to take this opportunity to commend local farmers for the way they have responded to the challenges of the Nitrates Action Programme over last eight years. Farmers have adapted well to a complicated programme, making changes to their farming practices and investing heavily in slurry stores in order to meet the water quality rules. It is evident that the programme has had a positive impact on the environment. The improved utilisation of manures and substantial reduction in the use of chemical fertilisers on our farms has significantly increased overall nitrogen and phosphorus efficiency. The long term trend shows that nitrate and phosphate levels in our water bodies are decreasing. I think these results have helped in the negotiations and I would encourage farmers to keep up the good work. The UFU will continue to seek recognition for farmers for the very positive role they are playing in creating environmental improvements in Northern Ireland and we will now work to ensure the new guidance documents and inspection process that will be developed are practical.”