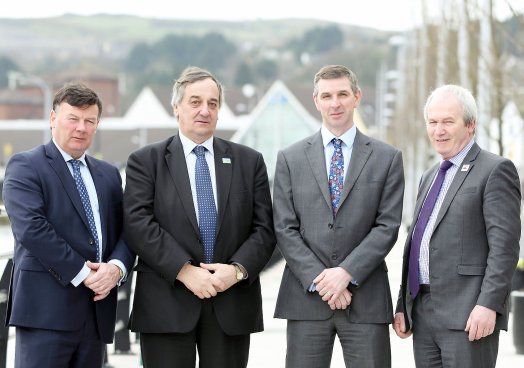 Joint statement from the UK farming unions on CAP implementation

The four UK farming unions, who met in Northern Ireland, last week have issued a joint statement on CAP implementation. Presidents Ian Marshall, Ulster Farmers’ Union; Meurig Raymond, National Farmers’ Union; Allan Bowie, NFU Scotland; and Stephen James, NFU Cymru are calling on UK administrations not to penalise farmers who make honest mistakes because of a lack of clarity over the new payment scheme rules. The Presidents are also calling on the UK agriculture departments to plan for making part payments to all claimants if necessary.

“We find ourselves in a unique set of circumstances this year, with the introduction of the new and very complex requirements under the reformed CAP. There are many elements that have changed completely from the previous CAP and there are still significant requirements, many relating to greening, that need to be clarified or confirmed. The slow progress and lack of clarity is causing confusion on the ground and many farmers are being forced to make business decisions or fill in their direct payment application forms with limited information. In addition to this, the whole greening regime is up for review in 2017, which could mean further changes to contend with.

“It is clear from our discussions, that there are implementation problems right across the four regions. In recognition of where we are with the CAP we are urging the UK administrations not to penalise those applicants who have made every attempt to comply with the requirements but find themselves caught out by the detail.

“These are exceptional circumstances we are facing as a result of the changes under the new CAP, and we are expecting that our respective UK government administrations ensure that the facilities are in place in each region to issue part payments to all claimants if this is necessary although, early payment in full is our major objective. We understand that the government departments are under pressure and are grappling with the complexities of the new CAP as well, however, it will be to detriment of the agri-food industry across the UK if farmers face long delays in receiving direct payments as a result of government failure to process applications in a timely manner.”