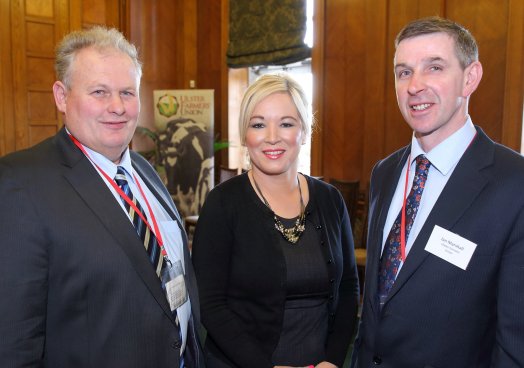 The Ulster Farmers’ Union is delighted to announce that it will host the 37th biennial North American and European Union Agricultural Conference on the 22nd-23rd October 2015. This is the first time that this prestigious congress will have been held in Northern Ireland and in fact on the island of Ireland. The conference brings together policy makers, influencers, and farmers from across the EU and North America to exchange experiences and discuss agri-related issues such as sustainability, collaboration, supply chain, the benefits of a common trade policy, and in particular trade policy within the World Trade Organization (WTO) and its future direction. The conference is being hosted in partnership with COPA-COGECA, the representative body for the European agricultural sector, which the UFU is a member of.

UFU President Ian Marshall said: “Agriculture is becoming an increasingly global discipline, as Northern Ireland’s farmers are all too aware, and often policy decisions made in other parts of the world are having a very real impact on our farm businesses here at home. It is fantastic achievement for the Ulster Farmers’ Union and Northern Ireland to secure this internationally recognised and high profile event as it gives us an opportunity to showcase our agriculture industry on a global stage. The conference is also particularly timely as the Transatlantic Trade and Investment Partnership (TTIP) negotiations between the EU and USA continue to rumble on and the outcome could have a significant impact regions heavily invested in livestock, such as Northern Ireland.”

Speaking at the launch Agriculture Minister Michelle O’Neill said: “I would like to thank all the sponsors present here this morning for their support that will enable this international Congress to be hosted here for the first time. I am delighted that my Department is also able to support this event that will be themed around ‘Making Agriculture a Success’.

“The conference will provide a unique opportunity for many of the top agricultural policy makers from Europe and North America to share the challenges that face farmers on both sides of the Atlantic. From the plans outlined at this morning’s launch event we have a lot to look forward to.”

Ian Marshall concluded: “The interests of Northern Ireland’s farmers are already well represented in Europe with our dedicated Brussels office and past President Harry Sinclair serving as a vice-president of COPA. And although Northern Ireland will be one of the smallest regions participating in the congress, the profile and exposure as a food producing region and as a tourist destination that will come with hosting this conference will be immense. It would not have been possible to bring this conference to Northern Ireland without the considerable support and financial commitment from our partners and sponsors who include: the Department of Agriculture and Rural Development; NFU Mutual; Fane Valley; John Deere; Devenish Nutrition; Irish Farmers’ Journal; Zoetis; and Visit Belfast and we would like to take this opportunity to thank them for their continued support.”