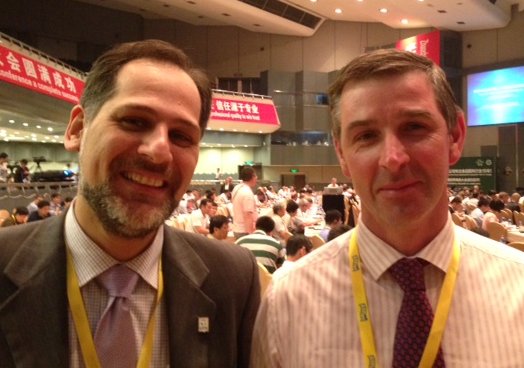 Ian Marshall said; “We have often heard of the enormous market potential for food products, particularly meat and dairy, which exists within the Chinese market but now that we have seen it first-hand we know that these opportunities are very real.  Not only is there massive population growth in China but the growing wealth and increasing number of people in the middle classes who are demanding a safe and more westernised diet, are consuming more meat and dairy products. This was evident in our visit to one of the major retailers out there.  This information coupled with what we believe to be genuine willingness from both the Chinese Government and food processing companies out there to import more of these products from other world suppliers does provide very significant opportunities.  Inevitability this will not happen overnight but the increasing urgency from China is clear to see. It was also good to see our NI Executive and British food industry organisations such as BPEX and AHDB, having a presence out there.  Like Bord Bia from the Republic of Ireland, it is essential to be there to facilitate meetings and participate in trade shows like the one we also attended in Beijing, to build up the working relationships and ultimately partnerships through which these trade opportunities can be realised.”

Ian continued; “All of the major world food exporting countries are making similar efforts and in many cases are much further advanced in this process than we are but that being said the market opportunities are so huge that there should be more than enough potential for us all.  Indeed there is enormous optimism in the continued strengthening of world meat markets across all sectors and it is essential that we follow through and continue to progress market access going forward.”

Ian Marshall concluded; “The Agri Food Strategy Board recognised these opportunities in its ‘Going for Growth’ strategy report back in May 2013 and we must ensure that we act quickly so that we don’t miss out on securing this very real potential that exists.”