In recent months, the Ulster Farmers’ Union’s Animal Health and Welfare Committee has continued with efforts to speed up the eradication of Bovine Viral Diarrhoea (BVD) from Northern Ireland. This has included attending the UK wide BVD Free Conference to discuss current progress within the rest of the UK and Ireland. As part of the event, we received an excellent case study from vet turned farmer Rob Drysdale, who was able to demonstrate how having one BVD persistently infected calf in a batch of 50 cost his business over £4,500 from increased mortality and veterinary bills, and decreased live weight gain and a longer time to finish. During the event, I took to Twitter to share this story which led to another farmer sharing his story where he endured 33 BVD persistently infected animals in one outbreak costing his business over £25,000. His concluding statement was that “obtaining BVD free status and vaccinating for BVD was the single most profitable decision their business has ever made”.

Closer to home, as of the end of July 2019, there was only 669 BVD positive animals alive in 431 herds within Northern Ireland. This figure represents a 37% decrease from the 1,069 animals alive on 699 herds reported in August 2018 which is encouraging progress. Additionally, the removal rate of BVD infected animals within 35 days of receiving test results has increased to over 70% which is also positive news as more farmers are removing these animals sooner thereby reducing the disease risk to their own and their neighbours’ herds.

By way of current policy interventions, due to the ongoing absence of local government, industry is seeking to use tools more readily within its control to speed up eradication. One avenue identified has been farm quality assurance schemes. At present, 69% of the BVD positive animals are being retained on quality assured farms. In consideration of this, the UFU is currently in discussions with other stakeholders to consider introducing a new non-conformance within farm quality assurance schemes for retaining a BVD positive animal on-farm for longer than 35 days after receiving a positive test result and for failure to adequately isolate a BVD positive animal. At present, these conversations are approaching conclusion and to date there has been a general consensus that the inclusion of this standard would be a positive step in the journey towards BVD eradication. The inclusion of these standards would further tighten up existing controls around BVD meaning that positive animals cannot be sold, cannot be taken to a NIMEA abattoir and cannot be kept on quality assured farms. As such, this should further increase the incentive to put down these animals promptly.

At this stage, it is important for producers to be aware that as an industry, we are now trying to address the tail end of this disease and control measures are only likely to continue to tighten until eradication has been reached. As such, we would encourage producers to take prudent and responsible action now with any BVD positive animals on their farm. 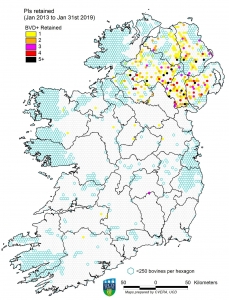