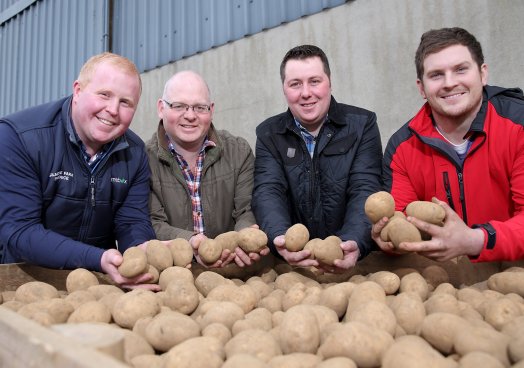 The UFU Seeds & Cereals Policy Committee with partners CAFRE and UAS kicked 2015 off to a positive start with yet another excellent 2015 arable conference. The Seeds & Cereals Policy Committee also attended Farmhouse Breakfast at Stormont hosted by Michele O’Neill MLA Minister of Agriculture and Rural Development.  The UFU continue to work closely with HGCA (Home Grown Cereals Authority) who part fund the promotion of farm house breakfast week in partnership with UFU, Food NI and the NI Regional Food Programme.  HGCA UFU and NI Good Food will again be teaming up in May 2015 delivering the Grain Chain experience for kids and bread baking demonstrations for all at RUAS 2015.

Research for arable and horticulture sectors remains high on the UFU Policy Committee agendas and representatives from UFU and UAS have met with both DARD and AFBI to discuss sector needs going forward.

Access to Land:  UFU Potato Policy Committee members reported recently that many in the industry are finding it difficult to secure land in 2015 for potato production.  The UFU are monitoring the situation.

The UFU Potato Committee endorsed the need for such an initiative and have further met and reaffirmed their commitment with Ian Duff NI Potato Promotions co-ordinator and Ivor Ferguson UFU Deputy President.

This promotional campaign is dependent on all to play their part and contribute.  Copies of the Northern Ireland Potato Promotion Campaign flyer have been circulated and are also available in all UFU Group Offices.  This is a three (3) year programme and Standing Order forms should be completed and returned to your bank on or before 1st March 2015.   We have also put in place special arrangements for those with smaller areas of potatoes who want to support the industry, these growers can pay up front for all three years, by forwarding a cheque with their Business Name and Address or DARD Business ID to ‘Potato Promotion Group’, c/o Ulster Farmers Union 475 Antrim Road, Belfast. BT15 3AD.

How do I know that my money will be wisely spent?

The programme is being run by a Potato Stakeholder Promotion Group with representatives from all parts of the industry. Only they will decide how the money is spent.

The Group will report regularly to the industry on the work undertaken and results achieved.

More specific reports and financial accounts will be issued to all supporters on an annual basis.

Can I be sure that all the funds collected will be spent on promotion and not on staff and committee expenses?

100% of the funds collected by the appeal will be used to fund the marketing professionals and marketing activities. Expenses during the start-up phase and in overseeing the programme will be fully covered by UFU and DARD.

What is in it for the small producer?

The promotion will benefit everyone as it is not linked to any individual brand or variety of potato or washed versus unwashed supplies.

The promotion will be generic and provide a platform to be built on locally as well as NI wide.

The more growers get involved with their own activities and farmgate promotions the more everyone will benefit.

Is there not a risk that it will just help the big boys and the sales of imported potatoes?

Packers will pay for all potatoes packed for sale locally – even if imported, so cannot escape paying into the promotion fund by using imported potatoes.

Promotion of all local potatoes will be part of the package.

Generic promotion provides the basis for all to benefit, but farm retailers and others will need to take action to build on the promotion in their own local market.

Surely some will pay and others will get the benefit?

A Statutory scheme is a non-starter as it would require legislation and there will not be the political will to introduce it in the light of experience with the Seed Potato Levy. It must be backed by follow-up of non-payers which is both unpopular and administratively expensive.  For these reasons the Group has decided to go ahead with a voluntary scheme driven by leadership and “gentle persuasion”.

Why should industry pay for promotion?

Quite simply because no-one else will do it.

Packers will promote their own brand, not all potatoes, and retailers tend to use potatoes as short term promotions to attract customers without influencing long term demand.

I have no idea what area of potatoes I will be growing in future years – it depends on the land I can rent?

What  we ask you to do is estimate your average area over the three years 2015, 2016, 2017 and work out the contribution using the scale provided – e.g £6 per acre per year for ware growers . In other words if you usually grow about 25 acres each year then the annual contribution should be £25x6 = £150.

Will the promotion work?

Similar promotions have worked for others and should work equally well in Northern Ireland.

“Increased consumption of mushroom by over 23,000 tonnes over three years” Bord Bia “ More to Mushrooms” campaign  in UK.

“Creating and building increased demand is the only sustainable selling strategy to improve volume and profit”.    Potatoes South Australia

71% of consumers said that the campaign changed their perception of potatoes as a healthy food.  Potato Council.

At the same time we have to be realistic, no campaign can work miracles overnight. It will take time and must be sustained over several years.  This Campaign needs industry support to be successful.