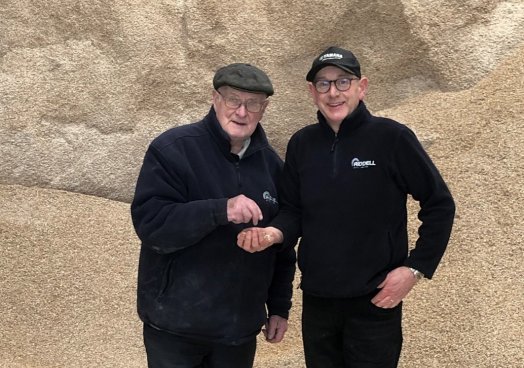 Seskinore man Jim Riddell has been a dedicated member of Mid Tyrone Ulster Farmers’ Union (UFU) group since its formation in 1968, serving as group chairman from 1993 to 1996.

Jim was born in 1928 in Philadelphia, USA. His father and uncle emigrated to Canada in the early 1920s when there were grants available to immigrants who were willing to work the landscapes of rural Canada. Later they crossed the border into the United States, and it was here that Jim’s father met up with a local girl from Eskra, situated beside Seskinore. A wedding soon followed, and Jim was born a year later but these were difficult times in America and jobs were hard to find. Jim’s father was a plasterer and unfortunately work had dried up so it was hard to earn a living.

It was decided that Jim, his mother and his baby sister would return to Northern Ireland whilst his father remained in America to try and save enough money to buy a farm back home. This was an exciting journey for a young boy not yet five years old and Jim remembers the journey well especially the small cabin and bunk bed.

Jim’s first experience of farming was long before his father returned home. He spent a lot of time watching his grandfather and uncles work the land, doing all the different jobs that needed done. After a time, an opportunity arose for the family to buy 60 acres locally for £475 and his father returned from America to the farm at Lisnarable, Seskinore. Having a bit of land meant that it was also time to get some livestock and Jim loved tending to a few cows and hens.

Later Jim had made enough money to buy a farm where he still lives and works today. He married a local girl Molly Caldwell, and they went onto have four children, Joy, Helen, Pearl and Robert. Jim worked hard on his farm and was always looking to bring new ideas or find new ways of doing things. Jim had the first milking parlour in Co. Tyrone and was also one of the first to bring a combine harvester to Tyrone.

In the mid-50s Jim kept poultry, pigs, dairy and grew potatoes and compulsory tillage until 1955. Jim was fascinated with arable farming and grew grain for feed, this also fed Jim’s passion for big machinery. His first combine was bought in 1955, it was a second-hand Ransom with a four-foot cut, cutting 12 tonnes in a morning. A job which would have previously taken seven or eight men a long, hard day at the thresher.

It was around this time that Jim spotted an opportunity to begin selling machinery, he realised he could buy in keenly priced machines from England that suited the much smaller demands of farmers here who would not have been able to buy these machines new. Before long Jim has earned quite a reputation for himself as a knowledgeable and honest used machinery dealer and was spending six to eight weeks every year buying machinery in England. Although Jim is past retirement age, he still enjoys selling the occasional combine and was seen by many climbing the steps of and driving a twenty-foot header combine during Harvest 2020. Jim thought it was ‘just a little’ too big! However, he likes to point out there would be very few farmers who could say they have been driving combines for 65 years.

When Jim was asked for advice for other farmers, he said, ‘A farmer should farm as if he will live forever and live as if he will die tomorrow.’

Jim is a valued member within Mid Tyrone and brings a wealth of knowledge to the group. He was deservedly awarded Honorary Life Membership of the UFU in 2010.